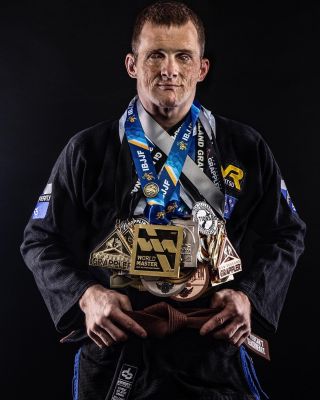 Head Coach at DAREDEVIL, it may be surprising to hear that Clinton had quite the rocky start to his grappling journey, losing his first 40 wrestling matches without scoring a single point.

Undeterred, Clinton persisted in his training, and fueled by a passion for the sport and his signature persistence, would eventually go on to win an unprecedented 10 national and 3 Oceania titles- all against sighted opponents.

Clinton started his Jiu Jitsu journey in 2014, seeking new challenges and goals to achieve. Jiu Jitsu was a natural continuation of his life as a competitive grappler, and he quickly immersed himself in training multiple times a day, everyday. With his extensive wrestling background, the guidance of his coaches at Tu Kaha, and an unmatched work ethic, he again found competitive success, winning multiple national and international titles in gi and nogi jiu jitsu.

Clinton's career as a coach began in 2008 with coaching Freestyle and Greco-Roman wrestling. Many of his athletes went on to become national champions and qualified for major international tournaments, including the Oceania Championships, Commonwealth games, and even the Olympic Games. He began coaching Jiu Jitsu in 2017, building a strong team out in West Auckland that has produced multiple adult and youth national champions.

In 2021, Clinton co-founded DAREDEVIL JIU JITSU, a dedicated jiu jitsu gym he could call his own, and a culmination of a lifetime of hard work.

Clinton's favourite part of coaching is helping those that may not have natural talent achieve whatever goals they set for themselves, and seeing them become happier and more confident in themselves.

Some of Coach Clinton's competition results: